If your mellophone has a bell that was fashioned on a French horn mandrel, then you’ve got it made. All French horn mutes will automatically fit your instrument. If not, then you will have to do some looking around, and in some cases do a little modification.  Alto trombone mutes can also be quite effective.  Try them out first to see if they produce a tone to your liking.

Sadly, Trial and Error will become your friends.

Mutes are especially important if you’re doing session work, because the mellophone fills in the same range as the alto sax, but unlike the sax can be muted to blend with both trumpet and trombone. In using a set of matching mutes between these three instruments, you can do with a trio what many bands can only accomplish with full sections.

Making it fit: As stated, some of these mutes may not be a perfect fit. The thing to look for here is a close fit. If you need a little more cork to make the thing fit your bell, add a little more. Cork is dirt cheap. All you need is a razor blade or exacto-knife and some contact cement. If you need less cork, file it down or use sandpaper.

The main thing to watch out for is the point of contact. If it’s at a place where the bell-slope is too steep, then it’s not going to hold well. You’ve got to make contact in a place where the slope is not too pronounced.

Don’t be afraid to make a few mistakes. Neither your instrument nor a mute is made of glass. Neither can be hurt by a bit of cork. If you have to move a cork on your mute, do so, and if you’re concerned with the cosmetic appearance, then file the old ones right down and paint over them.

Patterson Hornworks has developed a new lead pipe for the Yamaha Mellophone that gives it the same taper and receiver as a French Horn.  As you can see in the photo, it also angles up for better mouthpiece placement for horn players.

The lead pipe is still under development, but Patterson is converting a number of horns for different schools and so far the results have been very positive.

You can read a lot more about the new lead pipe on Patterson Hornworks' Facebook page.

A Palm Stop, also called Adjustable Hand Rest, or "duck's foot," is used to add support to the horn with your right hand. They aren't commercially available and can only be purchased and installed by an instrument repair shop.

Osmun Music carries one of these items. They write: An adjustable left-hand rest (sometimes called a "duck's foot") takes the weight off the wrist and little finger. Our handrest is easy to install and can be adjusted to fit any hand comfortably. When not in use it folds down against the body of the horn.

You can see (and order) their Palm Stop by clicking here. 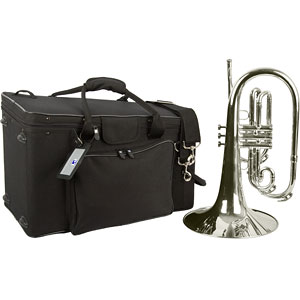 For over 25 years PRO TEC International has been supplying the music industry with cases and bags designed by musicians for musicians. In 1984, our designers came up with a true winner when they introduced the uniquely innovative PRO PAC case line. Since its introduction, these sturdy, lightweight, shock resistant cases have become the leading choice among musicians that demand the best in protection and convenience.

You can find a detailed review of the case at the Middle Horn Leader.

Don't get me wrong - it's a good case and I'm glad someone has finally made a case for the Mellophone.  But, in my opinion, it could be a little better.  First, it's only slightly smaller than a Yamaha case.  Second, it's designed more for the King and Dynasty horns than a Yamaha.  The Yamaha fits, but not squarely.  It's well padded on the inside, so it shouldn't matter, but I'm afraid that since it's not sitting squarely, a good bump could dent the bell.

Still, it's light and VERY strong, which protects the horn well, and it gives you the option to use a shoulder strap or, for an extra charge, backpack straps.

Click here to find an authorized ProTec dealer near you.